My Mood Stars in the Care homes?

My Mood Stars in Care homes?

I am a retired child minder from Maidenhead in Berkshire. In 2018 I developed and produced a highly effective and popular emotions resource called My Mood Stars.

Word grew of the benefits to children and young adults this resource provided.  After a while, more and more Early Years settings, schools and young adult residential care homes were buying them.

The lead play specialist at Great Ormond Street Hospital saw My Mood Stars on Twitter and asked for a Zoom chat. She went on to order 35 sets for each of the children’s wards.

In 2021 at the start of the first lockdown, a friend suggested that elderly community could make use of the Mood Stars as a way of communicating how they were feeling.

Being stuck indoors, and only being able communicate to friends and family behind a closed window, the Mood Stars provided a fun, sensory way of expressing how they were feeling.

It has  always been a part of my market research to ask for feedback, good or bad!

One of the local residents, an 80 year-old, said that she liked the feel of the Mood Stars. It reminded her of the blanket on her bed when she was a child. 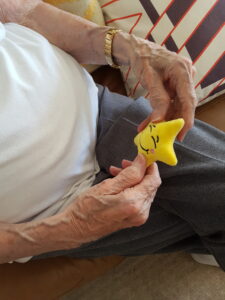 Once restrictions were lifted, I visited a local care home to gauge the reaction of My Mood Stars.

I handed one of the Mood Stars to a gentleman who was sitting at his tray. He took the Mood Star and used it to mop up some spilled tea and biscuit crumbs.

Initially, I was disappointed by his behaviour. However, one of the care workers told me that he was using the Star to express that he wanted to mop his tray. She made a note of providing him with a cloth at meal times.

I followed a care worker and two residents to the Activity Station. There, I set up the My Mood Stars board which has sticky Velcro dots stuck to it (about the size of a one pence piece)

The backs of the Mood Stars are Velcro receptive which means that they stick to the “Scratchy” side of Velcro.

I showed the care worker how to pelt the Mood Stars onto the board in the attempt to get them to stick to the Velcro dots.

There was laughter all around as the first three Stars bounced of the board and a celebratory “Yes!” when one of the Stars stuck.

The first resident had a go and completely annihilated me!

It was great fun!

I got in touch with my friend Louise from Messy Senses. Louise does a lot of work with the elderly and  I wanted her advice.

Louise loved the idea of My Mood Stars in care homes and suggested that there was a “Cognitive Stimulation” activity sheet available on the My Mood Stars website as a printable download. See here.

I would really appreciate your thoughts, comments and feed back, good or bad!

You can email me at wendy@wendywoo.uk