An Introduction to My Mood Stars

Many years ago when I was a struggling single mum, I decided to register myself as a child minder. Happily, this meant that I could stay at home with my three young children and earn some money too. 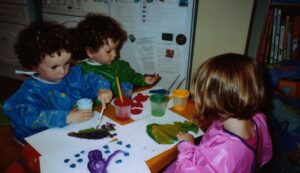 In 2000, Ofsted announced that all child minders would be grouped under the same umbrella as preschools and nurseries.

All child minders had to adhere to the Early Years Framework’s specific areas of learning.

We had to implement and evidence the areas of learning to Ofsted, which was now our governing body.

We had Ofsted inspections every three to four years for hours at a time to show how we were teaching each area of learning.

For many child minders, the pressure of being inspected and reaching the Holy Grail of becoming an ‘Outstanding’ or even a ‘Good’ child minder was too much. Because of this, they left the profession.

However, I decided to stay on because my children loved having other children around them, and I did too.

I dived into the Early Years Framework with aplomb.

The areas of learning seemed quite straightforward to me.  I enjoyed bringing numeracy and literacy into the setting. Moreover, the children loved art and design, technology, and understanding of the world.

There was just one area that I struggled to implement, this was due to the fact that I didn’t really understand what it was about.

Now, what was Personal, Social and Emotional Development when it was at home?

I started to do some research about PSED. Firstly, I became fascinated in learning all about the importance of children being able identify their emotions. Secondly, It made me take a look at my own emotional wellbeing.

Looking on the web for resources to help me implement PSED, it became clear that there wasn’t anything suitable for my setting.

So, being a dab hand with a needle and thread, I decided to make some resources!

The first thing to fall out of my sewing box was a felt star, this was an ideal shape to start with.

Thinking of all the different emotions that my children were displaying in the setting, I set about designing and sewing emotion expressions on to the stars, for example, Sad, happy, angry, shocked and sleepy. Worried and timid followed later. 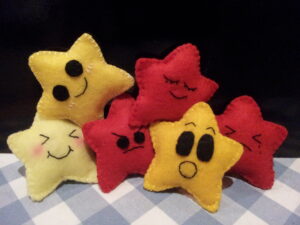 I sent sets of the Stars, which I’d named My Mood Stars to fellow child minders to implement and evidence in their settings. We used them to talk to children about different feelings. Popping the Stars into story sacks, the children would make up different scenarios.  This helped them open up about things that made them worried, angry, surprised, sad and happy!

In 2016 I had my inspection by an Ofsted inspector. He was a lovely chap named Derek. I immediately felt very reassured with his calm manner and sense of fun.

Derek asked me about the soft stars that the children were drawing at the time.  I explained the above to him and he suggested that there was a huge market for such a resource.

“Market them” he said. “They’ll do really well.”

I got my outstanding grade and danced around the kitchen (much to the amusement of the children!)

To Market To Market…

In 2018, I took Derek up on his suggestion and after retiring from child minding, I set about manufacturing and marketing my Mood Stars.

I became an entrepreneur!

I entered the competition and I won!  The award presented by the man himself! 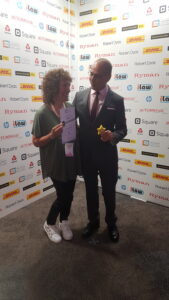 Recently I have been made aware that My Mood Stars could be a valuable and beneficial resource for our more senior folks.

With dolls being used in doll therapy to stimulate cognitive function, it has been suggested that I introduce My Mood Stars to Care Home professionals.

Please look out for my second blog which will feature more closely the benefits of My Mood Stars in the care home environment.

You can email me at wendy@wendywoo.uk