How to win Small Business Sunday

How on Earth do small businesses win Small Business Sunday?

What is Small Business Sunday?

Well, over in Twitterland, every Sunday evening between the hours of 5.30 p.m and 7 p.m, the multi-talented and incredibly successful Theo Paphitis

The rules of the competition are easy:

What made me enter Small Business Sunday?

It was my very good pal Rebecca De Jager from Hugo’s Workshop who first suggested that I enter the competition.  An avid supporter of My Mood Stars, she thought that I would win hands down!

Always up for a challenge, I religiously tweeted Theo every Sunday evening come rain or shine. It didn’t matter if I was hiking in the Nevada mountains, recovering from a hip operation, attending weddings or funerals, come what may, I was going to win this thing!

After about 17 weeks, I actually began to wonder.  There were small businesses winning (Theo chooses six winners on the following Monday) every week.

Some who had only recently entered and winning the following week!

I had to up my game!

Looking at the winners’ tweets I tried to analyse how they had won.

Now here’s the thing. You only get 280 characters per tweet.  That’s not many words when you are trying to extol the virtues of your company!

So, as well as checking my spelling, I decided to change things up a bit each week.

I have a lot of images of My Mood Stars so changed them every week.  Some weeks I added video, other weeks I added humour. One week, I tried to pull on Theo’s heartstrings.

There were weeks I added my website and weeks that I didn’t, but I always remembered the all-important #SBS

However, each week my tweets were rejected. So disillusioned was I with the whole thing that on about week 52 I posted about my cat!

It didn’t win but got over 1,000 likes and an incredible 70 followers!

Soon I had a posse of followers and admires and we began to like and respond to each other’s tweets each Sunday evening.

My reach grew and I made hundreds of virtual friends who all rooted for me as I did them.

Sunday the 9th of February came and went and I had tweeted my, I’m guessing, 100th Small Business Sunday tweet!

The 10th February was the Monday. It was around 8 p.m and I was clearing away dinner.

What in the name of Hitler’s pantyhose is going on? Why is Theo Paph…… 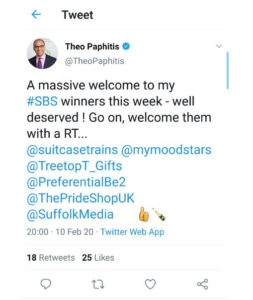 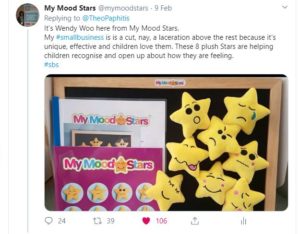 The excitement and furor of the following week was pretty immense!

I got 9 orders for sets My Mood Stars on the following day!

Everyone wanted to congratulate me and know more about me and my business! I think I was on Twitter one day that week for 5 hours solid!

I had just got in to this event by the skin of my teeth because If I’d have won the following week, I’d have had to have waited another year for the 2021 event (to which all previous winners are invited too.)

I booked my hotel.  The event was to be at the ICC in Birmingham.

Reserved 2 nights, one night before the event, as I wanted to arrive on the Friday morning looking glam. And a night after the event as I didn’t want to go home on the train shall we say a little tipsy!

Arriving at the ICC (just across the road from my hotel) was nerve racking. I hadn’t invited my husband as I’d wanted to let my hair down and flirt with all my VFs!

The problem was that no one looked like their profile picture, especially if it’s a candle or a wedding cake!

So, it was almost impossible to recognise people as I’d only ever seen their profile pictures!

Fortunately, I have Wendy Woo as my profile picture and the bravest of the crowd made their way to me!

Oh the hugs and the shrieks and the realisation that the chap I’d been flirting with for the past two years looked just like Shrek!

(Not sure he was that enamoured with me to be fair!)

The camaraderie, the love in the room was incredible.

SBS has its 10th anniversary!

What made this event so special was that it was the 10th anniversary of Small Business Sunday and the very first winners were there with the latest. That was amazing.

There were some “Talks” which only served to give me an hour on my phone to let people know what was happening and there were others that had me glued to my seat like the talk by the inspirational Sara Davies from Dragon’s Den. Entrepreneur, business woman, mum and all round, (or oval as the case may be) good egg.

What a woman! She totally inspired me!

And here I am, posing for the camera and the one that we all wanted to bring home… 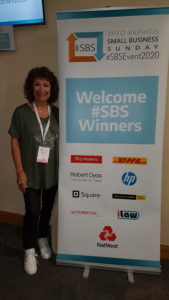 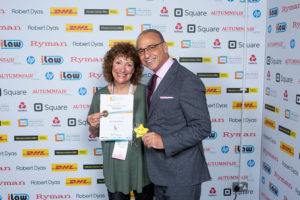